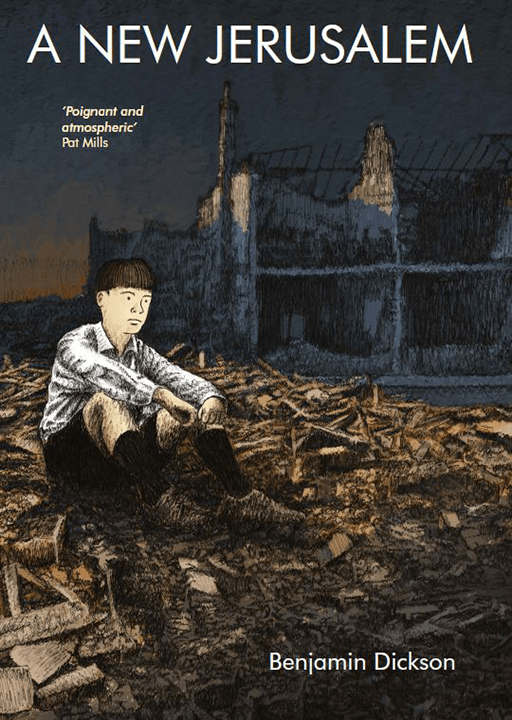 Eleven year-old Ralph lives with his mother, plays in bombed-out buildings, and dreams of the day his father will come home and tell him all about his heroic battles. But when his father actually does return, he’s far from what Ralph expected: his father is sullen, withdrawn and refuses to discuss the war at all. As Britain looks to a future fit for heroes, Ralph’s father struggles to adjust to civilian life. Susceptible to fits of crying and uncontrollable rages, his behaviour starts to directly impact Ralph and his mother, and the community around them.

“A stunning tale” – Down the Tubes

“It is moving. It is smart. It is credible. He captures the barely seen wounds of post-war.” – Cynthia Enloe, author of The Big Push 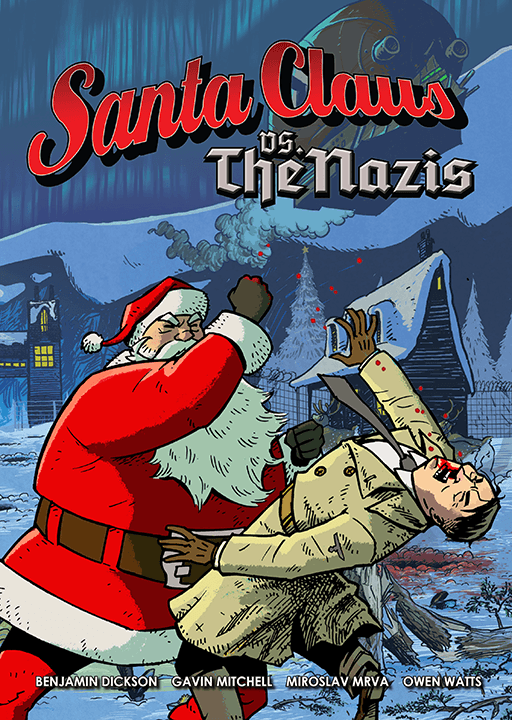 Santa Claus vs. the Nazis

WHAT DID YOU DO IN THE WAR, SANTA?

During the invasion of Russia in 1940, German troops stationed in Lapland discover a mysterious village nestled in the mountains. A village that makes toys for children, run by a man with a big white beard…

Hitler realises its significance at once. Wars are won by industry, and Santa Claus has the greatest industrial capacity in the entire world. If he can deliver a present to every child in the world in a single night, Hitler could do the same with a bomb. Whoever controls Santa’s factory will win the war.

“One of the smartest, brightest pieces of sequential storytelling we’ve seen in this medium for years” – David Lloyd (V for Vendetta)

“Extraordinary” – Down the Tubes

“Honestly, I don’t know how I feel about this whole thing.” – Comics Can Be Stupid

“I liked it! It was exciting and the violence was the best part!” – Anabel F, aged 9, Huffman, Texas 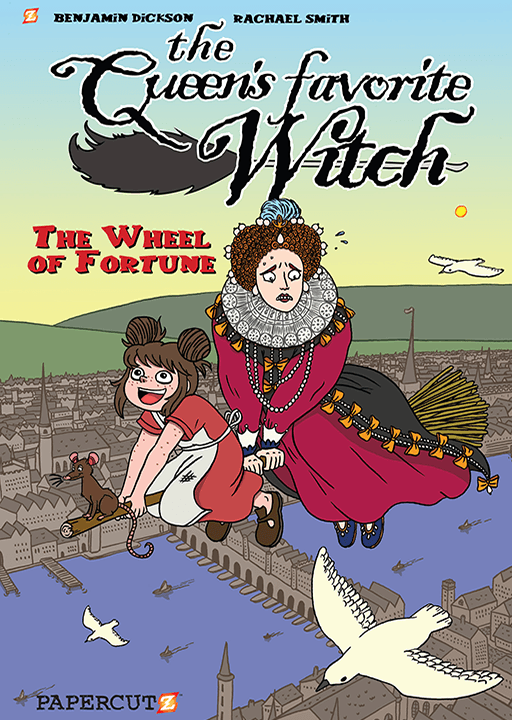 Elizabethan England is a time of superstition and strange goings on. If you have a problem, it’s common to go to a witch for help. And Queen Elizabeth I is no different…

When Daisy — a precocious young witch — learns of the death of the Queen’s Royal Witch, she flies to London to audition as her replacement. But Daisy is from a poor family, and they don’t let just anyone into the Royal Court. The only way into the palace is to take a job as a cleaner.

As Daisy cleans the palace, she draws the attention of Elizabeth’s doctor (and arch-heretic) John Dee, who places her into the auditions — much to the chagrin of her more well-to-do competitors. But Dee knows how dangerous the corridors of power have become, with dark forces manipulating events for their own ends. To him, Daisy represents a wild card — one that may decide the fate of many.

With so many wanting her to fail, Daisy will need all her grit and determination to make it through these auditions — not to mention a sense of daring and adventure… 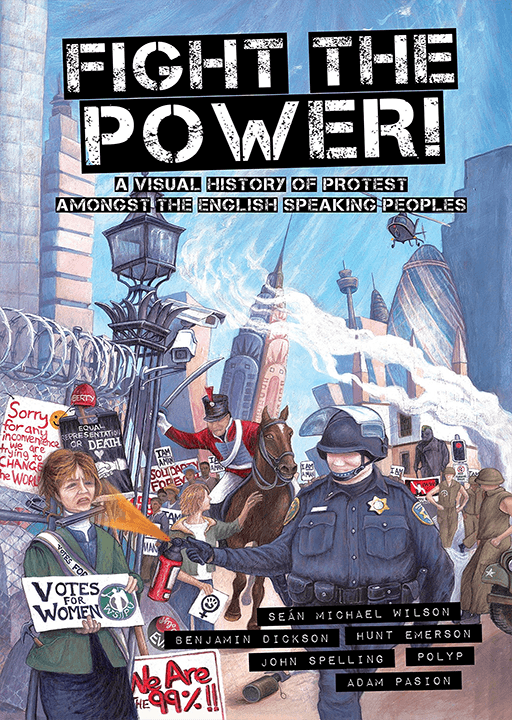 Fight the Power! A Visual History of Protest Among the English-Speaking Peoples

Today’s movements are part of a long history of struggle. This book visualises key moments in history where ordinary people have risen up and fought governments, corporations, even empires. When the 99% have stood up to combat exploitation and abuse or in pursuit of freedom of action and a better life. In other words, to show times in history, just like today, when people have struggled forward to Fight the Power! This comic book covers 14 cases of such struggle over the last 200 years and in several English speaking countries.

Here are some short stories that are now either out of print, or otherwise hard to find. I hope you enjoy them!

My favourite of the short stories I’ve produced, this was made for Accent UK’s Robots anthology, and is usually the short story I show people when I want to give examples of my work.

Not One Minute of Silence (Ctrl Alt Shift) 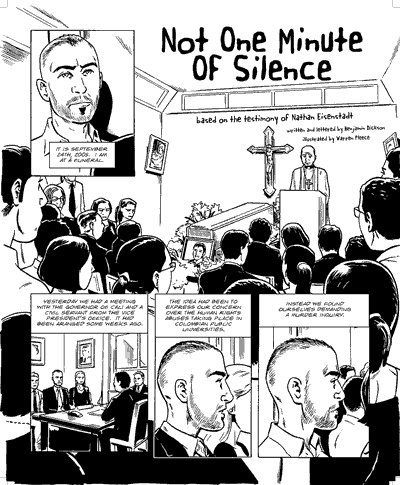 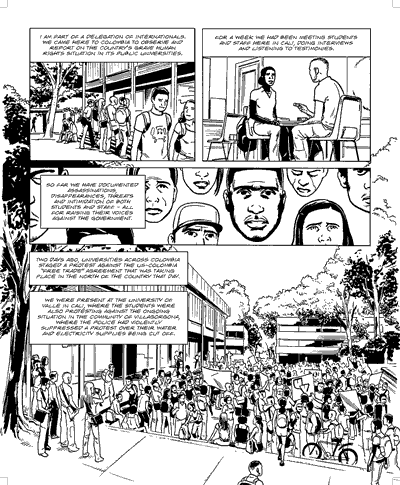 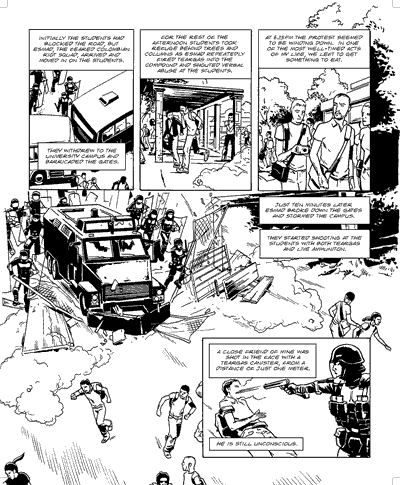 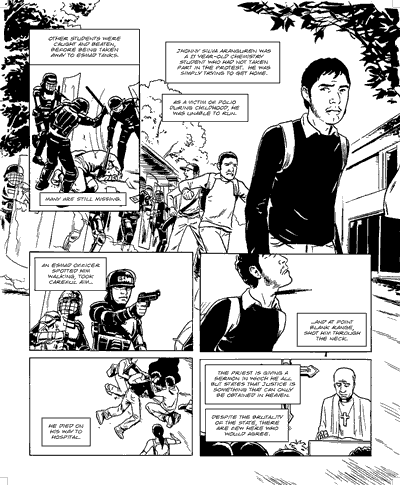 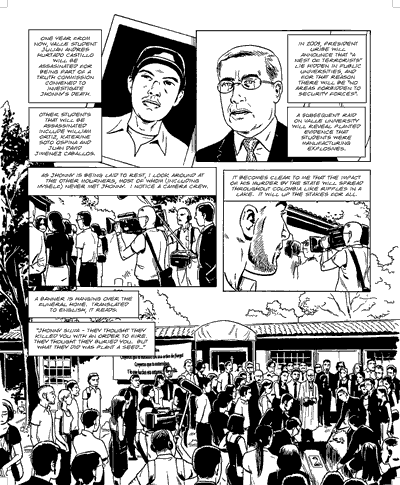 This is the true story of a friend who went to Colombia to record human rights abuses, and becoming witness to a murder. The story was later translated into Spanish, and was circulated in Colombia.

2021 – The Queen’s Favorite Witch, Vol 1: The Wheel of Fortune (With Rachael Smith, Papercutz)

2012 – The Lovecraft Anthology, Vol 2 (With Mick McMahon, Self Made Hero) Short story adaptation: “The Picture in the House”. for Self Made Hero’s HP Lovecraft anthology.

2011-2014 – Slumdroid (with Tony Suleri, Scar Comics) Created as 4 volumes at 48 pages each, although the book was completed, only the first 2 volumes were published. We released all 4 volumes online for free for a brief period at the beginning of the Covid-19 pandemic, for those who were self-isolating.

2009 – Ctrl Alt Shift Unmasks Corruption (with Warren Pleece, Ctrl Alt Shift) Short story: “Not One Minute of Silence”. For an anthology on the theme of corruption.

2008 – Robots (Accent UK) Short story: “Divinity, Existence and Toast”. For an anthology on the theme of robots.

2007 – Zombies (Accent UK) Short story: “Spirit of the Apocalypse”. For an anthology on the theme of Zombies.

2006 – Monsters (with James McKay, Accent UK) Short story: “Purity or Nothing”. For an anthology on the theme of Monsters.

2005 – Falling Sky (Scar Comics) My first full-length original graphic novel. It won Ain’t It Cool News’ “Indie Surprise of the Year” award, and later was named one of their best books of the decade.

2003 – Phobias (with William Volley, Accent UK) Short Story: “Monophobia”. For an anthology on the theme of phobias.

2016 – A Dream of a Low Carbon Future (editor, letterer and designer, with James McKay, Leeds University)